I was finally able to get out and fly this weekend to test out my newest toy...an ADS-B IN receiver built from a Raspberry Pi. Now that I have tested it and have a nice screenshot of the info is provides (proof or it didn't happen right?), I wanted to do a quick write-up on the build and use.

Stratux is an open source project originally designed by cyoung and is written in Go, Google's programming language. The software runs on a Raspberry Pi, which is essentially a bare bones Linux computer. Attached to the Pi are two antennas that together with the software create a Software Defined Radio (SDR). The Stratux connects via Wi-Fi to your Electronic Flight Bag (EFB) of choice and provides weather and air traffic data.

For more information checkout the project website and the GitHub repo.

Cyoung was nice enough to have the parts list right at the top of his website with links to where to get all of the parts. In my case, this was a birthday gift and my non-aviator family who had zero clue as to what contraption I was building was able to get all the parts easily. I went with the Dual Band (most common) version for about $130. There are other versions available including pre-built and cheaper versions with fewer options. As the price is already cheaper than the commercial version at $900, I opted for the most functional of the Stratux builds.

If I were starting over I probably would have modified this parts list slightly. I would not have bought the pre-programmed SD card as I already had some micro-SD cards laying around the house and a new one is about half the price of the pre-programmed one. Loading the software is easy since this is an open source project; just download the ZIP file from the homepage and extract it onto the micro-SD and you have the SD card ready to go.

I may have also passed on the battery pack. If you have some sort of portable phone charger (like a Mophie) that has a micro-USB connection and/or your aircraft has a 12V charging port that you can use a mini-USB car charger with, then that would satisfy your power requirements as well. That being said, the linked charging pack from the project fits the case very nicely for a simple, compact, unit. I'm not into 3D printing but I have also seen plans to print a case for this project if you are looking to reduce cost even further.

Lastly, I had plans to use the Pi for other things (a quick swap of the SD card makes it basically a new machine) but the case is very purpose built and blocks access to the HDMI port. I will probably end up cutting a hole there but just keep that in mind if you have similar plans. Might be easier to drill the antenna holes than cutting a slot for the HDMI port.

In my typical fashion, my initial build was off the cuff and I didn't really have a plan. I bolted the board into the case, threw away the USB antenna adapters that were in the envelope with the antennas, and then had to coax each piece into place due to the limited space in the case. After digging through the trash to recover my lost USB-antenna adapters, I started over with a plan. 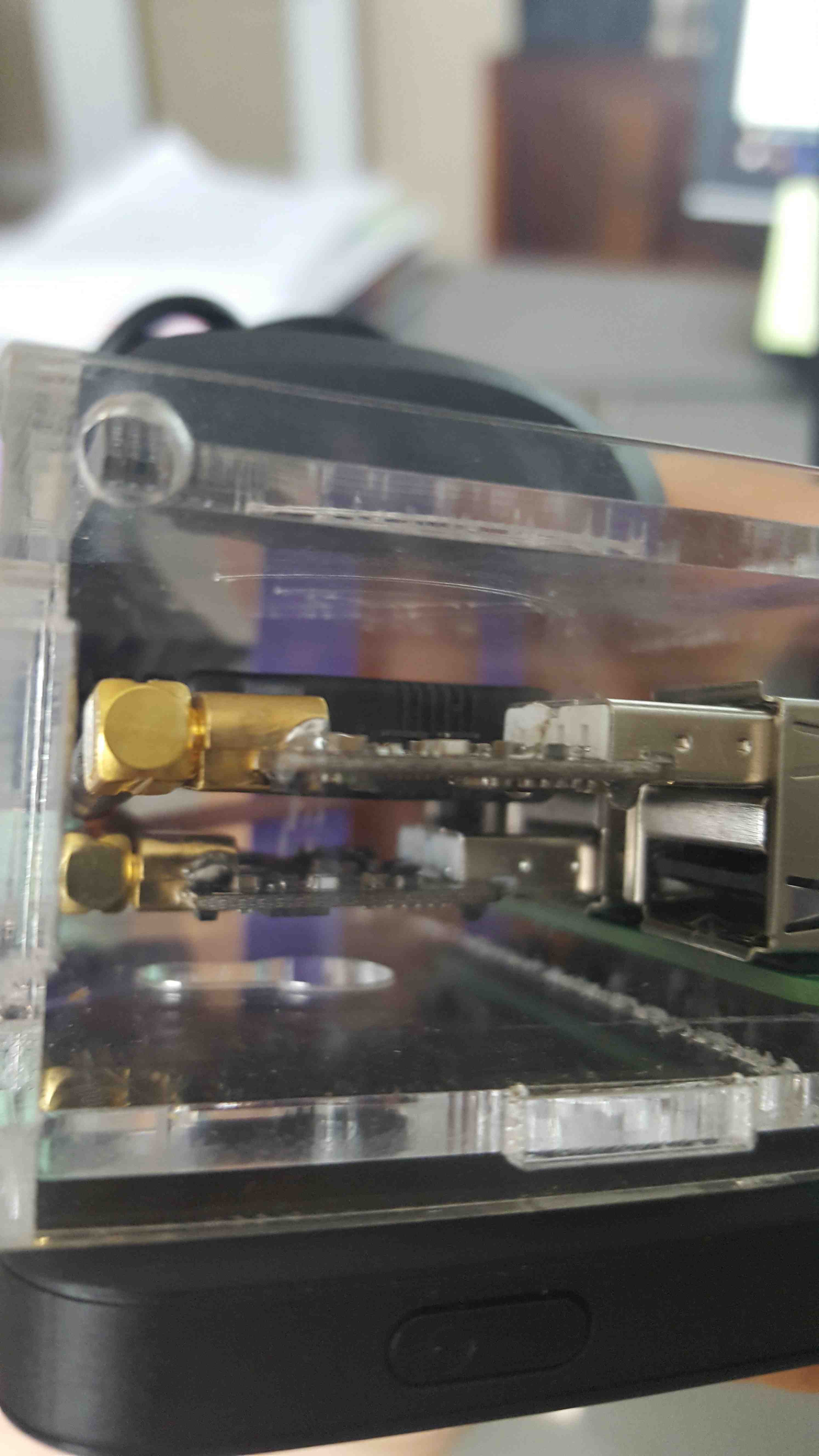 Connecting the power source (a regular phone charger in my case) brought the Stratux to life immediately (ok, it took a few attempts to figure out where the fan power pins were). Following the documentation, I connected my iPad to the stratux network, went to Foreflight, and saw at the top left of my map that was I was receiving 0 ADS-B towers. I was a little sad. You can view the status of your Stratux at http://192.168.10.1 on the iPad and everything looked fine. A little Googling revealed that you will only pick up ADS-B towers at about 1000' AGL in most cases. A flight test was necessary to test full functionality. At this point, set up the box however you want. For now, I am using rubber bands to hole everything together. I wanted to make sure I like the configuration before I develop a more permanent (glue) solution. 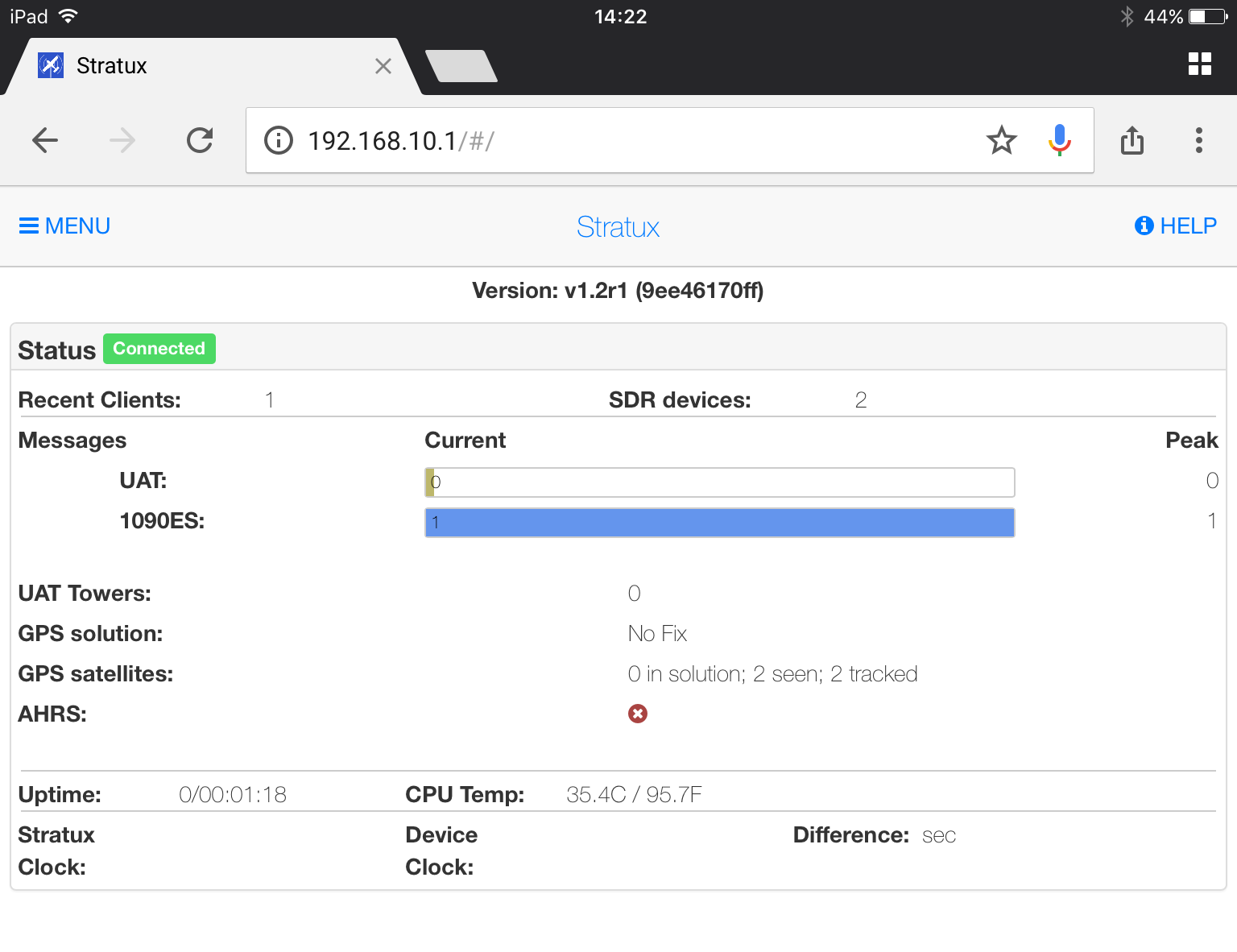 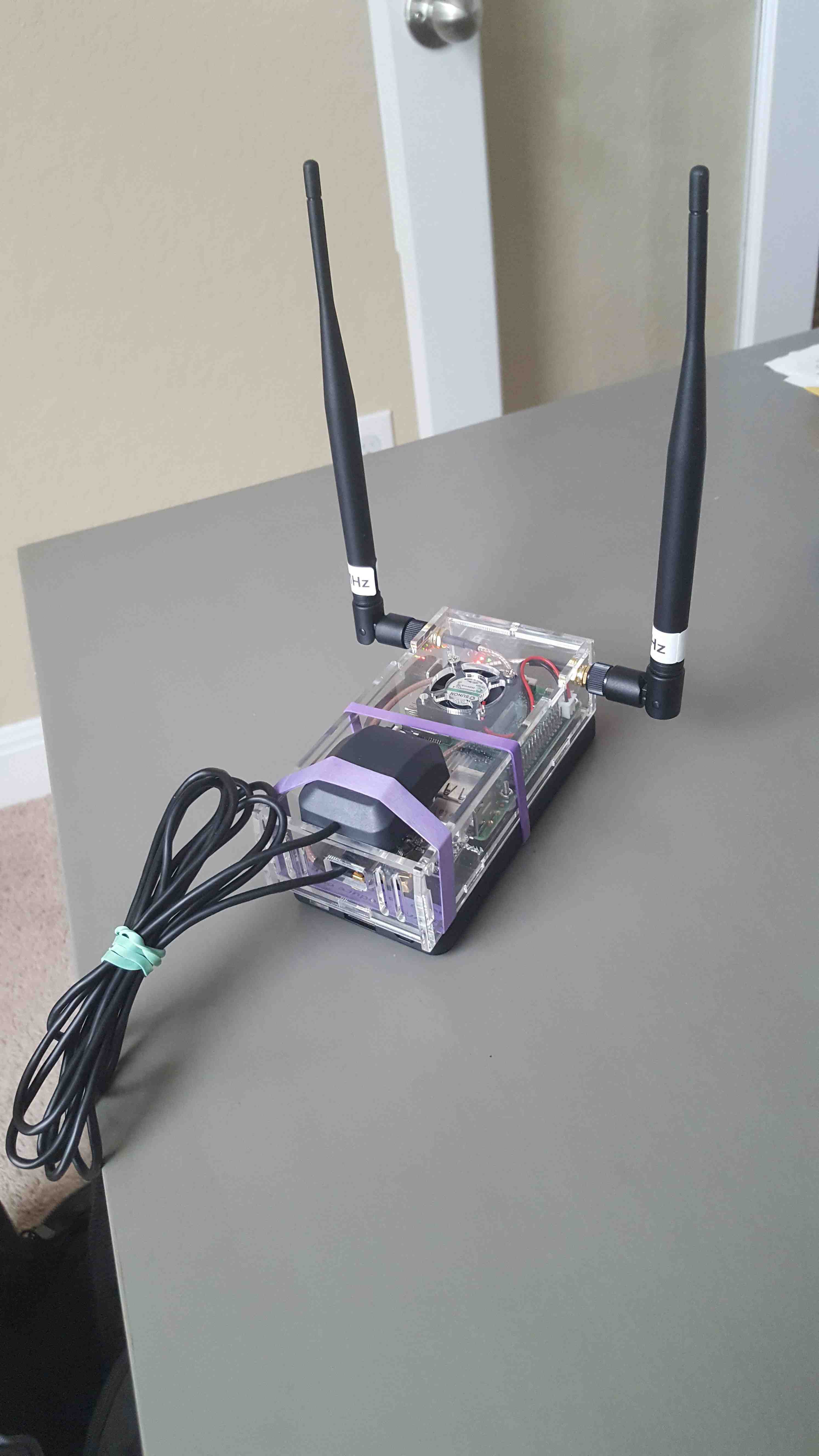 Being a IT security guy, I did not like that the Wi-Fi network was not secure so I found recommendations on how to remedy that situation. The first step is to get SSH access to your Pi. This is simple enough, power off your Stratux (either by removing power or from the web interface). Remove the SD card and open it on a computer. Add an empty file called ssh to the root. In Linux touch ssh in the directory where the SD card is mounted, in Windows Powershell echo $null > D:\ssh (replace D with the applicable drive letter). Re-insert the SD card in your Pi and power it back on. While connected to the stratux Wi-Fi network SSH to [email protected] (if using Windows, use Putty and login in using password raspberry. Default passwords suck, so change the default pi account password to something only you know using passwd pi. I want to do more research to find out if removing the pi account altogether is possible without messing up the software. Further details are located on the Stratux Wiki 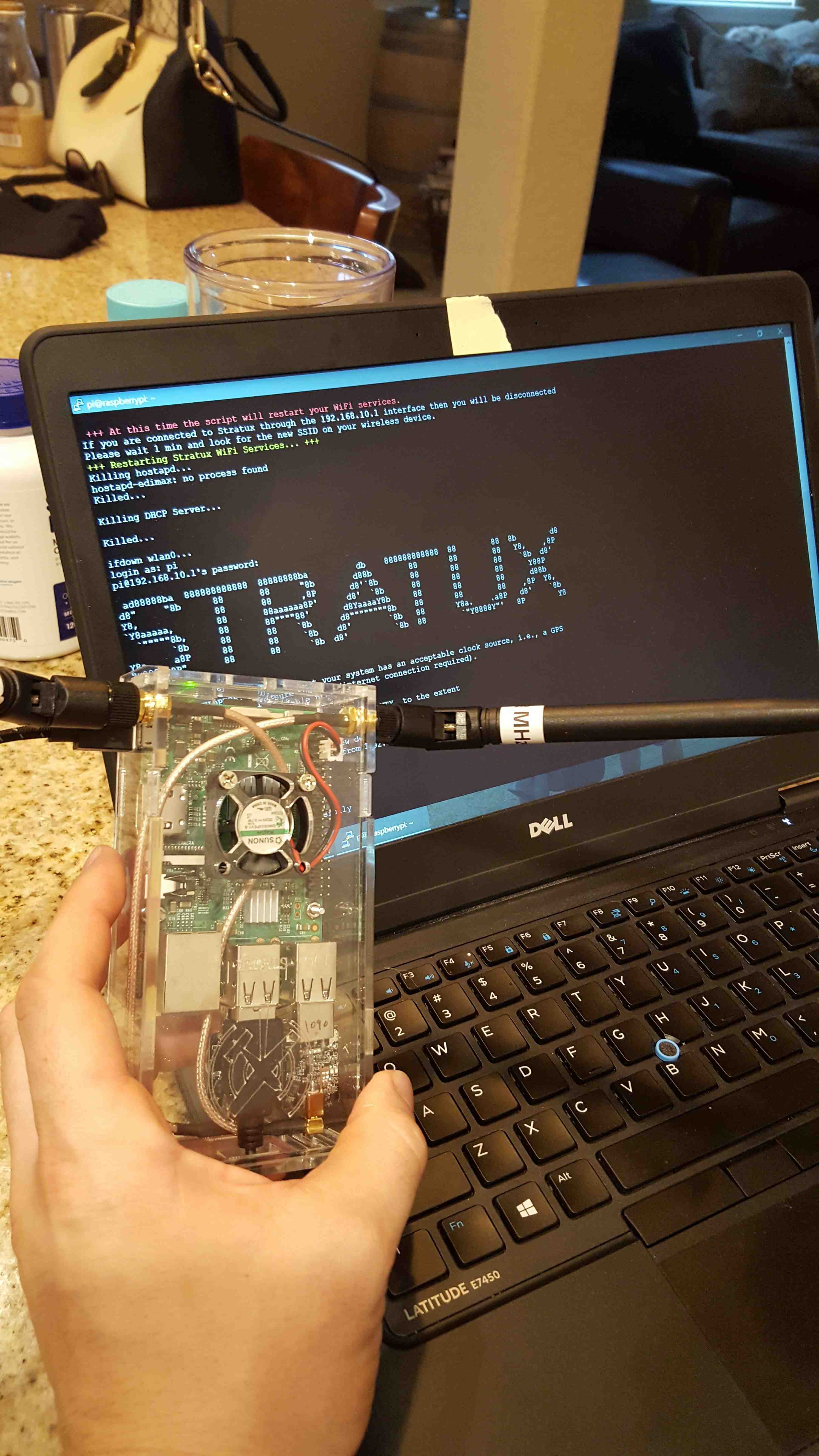 At this point I was ready to use this thing in the air!

A few weeks after getting my whole Stratux built and put together, I was finally able to test the capabilities in the air. A few of us made plans to fly 54mi to Lockhart, TX(50R) from Boerne Stage Field (5C1) for some of the world's best BBQ. Before takeoff, the Stratux connected to Foreflight just fine and once we were in the air, the ADS-B Tower count started to go up (we had 4 towers receiving at one point). All of a sudden, other aircraft in the area started showing up on the Foreflight map. We could tap any aircraft and get tail number, altitude, and speed. We correlated this data with traffic advisories we were getting from San Antonio Approach while on Flight Following and found the Stratux data to be surprisingly accurate. The only thing we did notice was the sometimes the Stratux would pick up our own track and produce and in-app advisory for our own airplane. This really freaked us out the first time when we were getting an alert that an aircraft was within .25 miles and at the same altitude, but eventually we figured it out. Knowing that Foreflight produces those traffic advisories for nearby aircraft is extremely nice though. 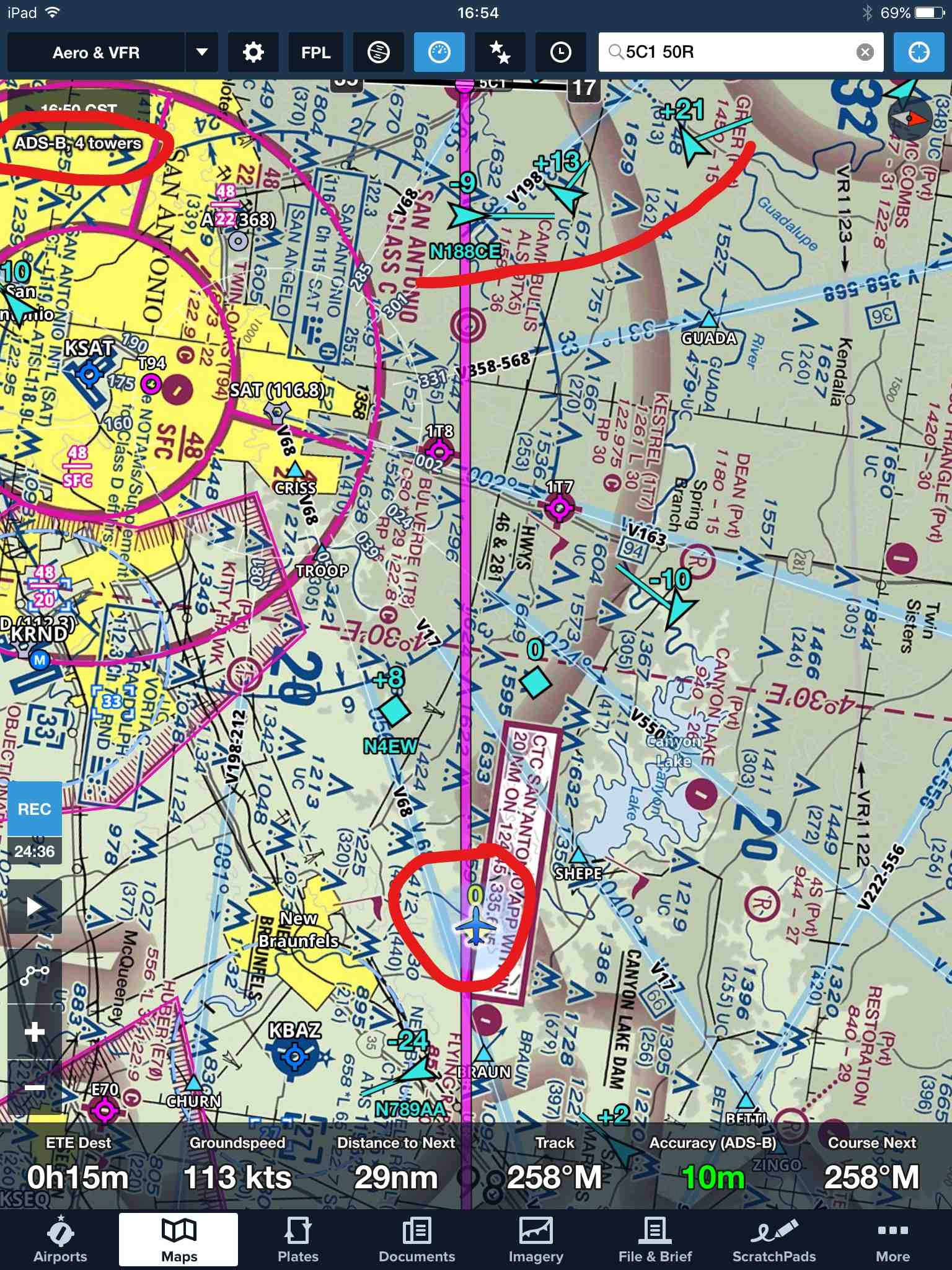 The BBQ in Lockhart was great and I ended up more than happy with my decision to build and use the Stratux. We also got some great views of nearby Canyon Lake. My goal now is to get involved a bit with the development of future versions.

Thanks to Cyoung for his work on this and making is open source for the community to use. 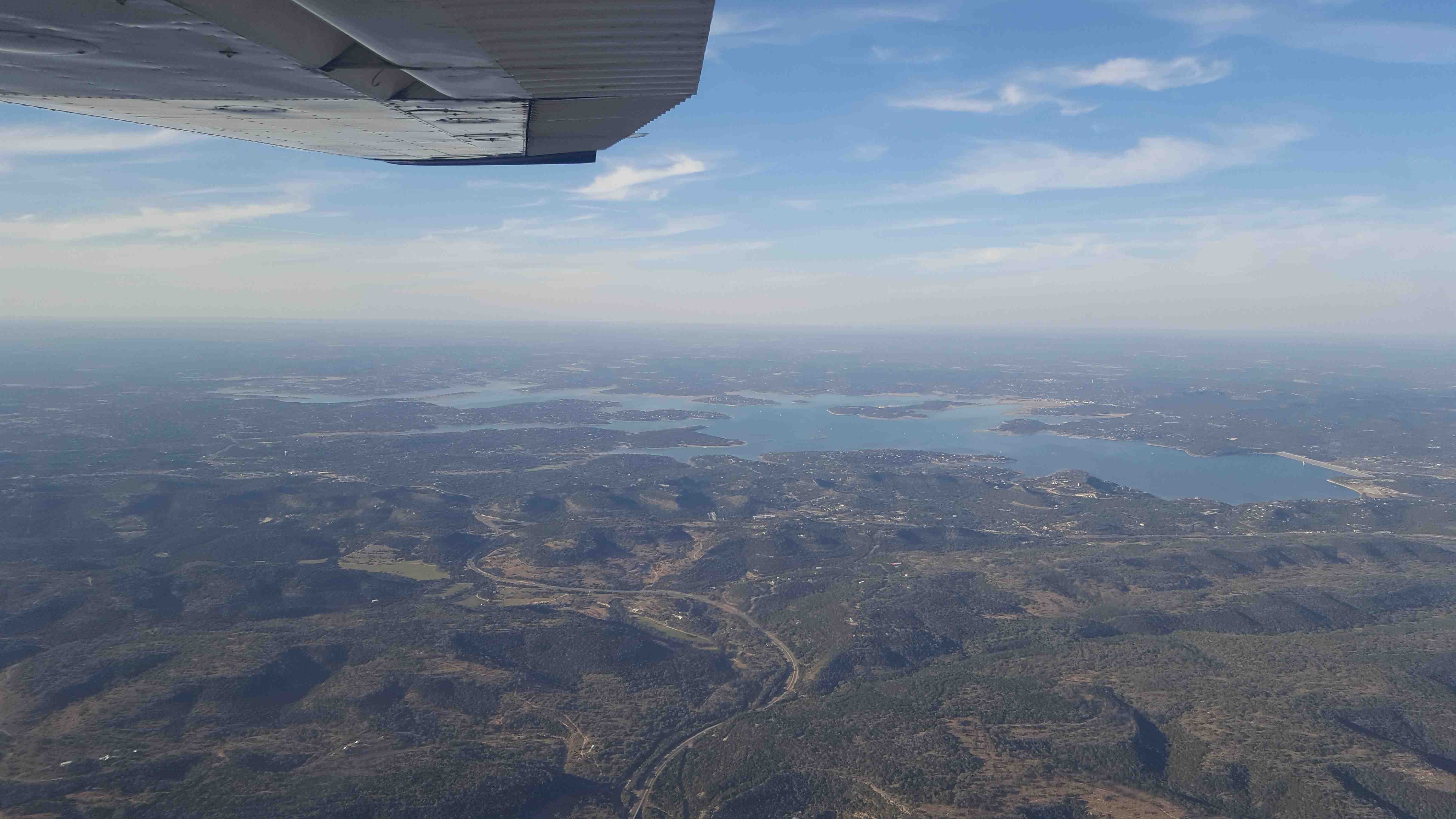